Michael J. Casey is the chairman of CoinDesk's advisory board and a senior advisor for blockchain research at MIT's Digital Currency Initiative.

The following article originally appeared in  CoinDesk Weekly , a custom-curated newsletter delivered every Sunday exclusively to our subscribers.

We hear that refrain a lot. So often, in fact, that it has (almost) become accepted wisdom for how the digital age must evolve. Sure, there's concern about the relentless accumulation of data about our online lives. There are even some legislative Effort to hold it back,  most notably in Europe.

But there's an all-too common perception that such efforts are doomed, that the encroachment into our private lives can't or shouldn't be impeded. It's a view that's either framed by a glass-half-full position that the benefits of the  Fourth Industrial Revolution  outweigh the costs of lost privacy, or by its glass-half-empty alternative: that the data machines of our global economy can't be stopped whether we'd like them to or not.

Yet the irony is that the torrent of information delivered by these machines frequently includes new items that make you stop and question this pervading fatalism. They remind us that lives are at stake, that we must take concrete measures to protect the private realm. 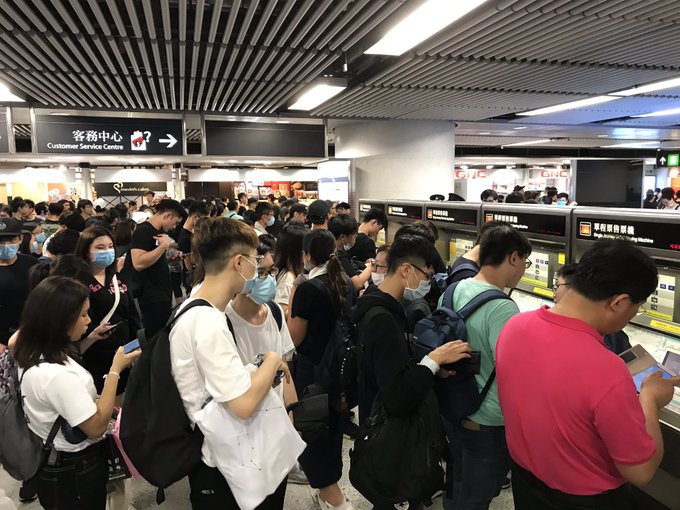 There is usually never a line at the train ticketing machines. Judging from an overheard convo, it appears that people are reluctant to use their rechargeable Octopus cards for fear of leaving a paper trail of them having been present at the protest.

The setting, of course, is Hong Kong, where hundreds of thousands of people took to the streets last week to protest changes to extradition laws that many believe would open a back-door to mainland Chinese judicial oversight. The behavior shown here reflects fears that Beijing is already, in effect, using a backdoor to surveil and control Hong Kong’s citizens, in this case via payments technology.

On Saturday, Hong Kong chief executive Carrie Lam announced that the extradition bill would be suspended, according to the New York Times.

Up until now, the Octopus card has been mostly hailed as a success story for the Hong Kong economy. The contactless stored value card, introduced by the Mass Transit Railway system just three months after Chinese sovereignty over the former British colony territory was restored in 1997, has evolved from simply a multi-ride MTR ticket into a widely accepted method of payment around the city. And by reducing the costs that banks impose on credit card payments, it has helped lubricate commerce in Hong Kong.

That was all fine until people began to realize that the Octopus network could also be a state surveillance tool, a concern that was, naturally, heightened by the ongoing encroachment of Chinese governance in Hong Kong’s affairs. So, as outlined in a follow-up report from Hui, many of the protesters resorted to the obscurity of cash-purchased MTR tickets instead of using their card. In fact, as others reported, many also went “dark” on social media, foregoing digital tools that had until recently been viewed as empowering the protest movement.

In a response to Hui’s post, my fellow CoinDesk advisory board member Dovey Wan showed how these actions in Hong Kong must be understood in the context of current digital life on the mainland. There, the pervasive use of mobile payment apps such as Tencent’s WePay and Alibaba’s Alipay has turned China into a virtually cashless society, one that has also given rise to losses of privacy and alternative workarounds to limit that loss:

Binance to Launch US Platform Soon, Helped by a Little-Known Partner
koinsbook

Blockchain payments startup Ripple has struck a deal to buy a stake in money transfer giant MoneyGram, the companies announced Monday.Under the deal, according